Why the U.S. Government Holds a Patent on CBD

Did you know that the U.S. government holds a patent on CBD and other cannabinoids? How does it work with the Federal law and what does it mean for CBD oil users? We know the answer.

It is quite disturbing that despite many states trying to introduce a more lenient legal framework for CBD and cannabis as a whole, the Federal law still considers the plant a schedule I substance. Any ‘drug’ listed in this category is claimed to have no medicinal value. That being said, as long as cannabis remains a schedule I drug, the government won’t allow researchers to conduct gold-standard studies in this subject.

However, USA is not the only country that can conduct medical research in regards to CBD. There are many independent studies from other countries supporting the medical benefits of cannabis and particular cannabinoids.

This is why more states are legalizing cannabis. And if you’re up to date with the community news, you probably know that Canada passed the Cannabis Bill, therefore legalizing the plant nationwide.

Hold on, because the interesting part is yet to come. It’s not just about the states’ laws being in contradiction to the federal law in the U.S.

Here’s where the real absurd happens.

The U.S. Government holds a patent on CBD and other cannabinoids

Yes, dear friends, it’s true. The U.S. Government holds a patent on CBD. Patent No. 6630507, held by the United States Department of Health and Human Services, covers the potential use of cannabis for treating a wide range of conditions.

Still, under U.S. federal law it has no medical use. Doesn’t it come to your surprise to hear that the U.S. government holds a patent on CBD and other cannabinoids as a potential medicine? And yet, keeps hemp and cannabis illegal, claiming they cannot benefit our health? If you are curious whether the patent is real, feel free to check it in Google Patents under the signature US6630507. It is titled “Cannabinoids as antioxidants and neuroprotectants”.The patent was granted to the Department of Health and Human Services (HHS) in October 2003. 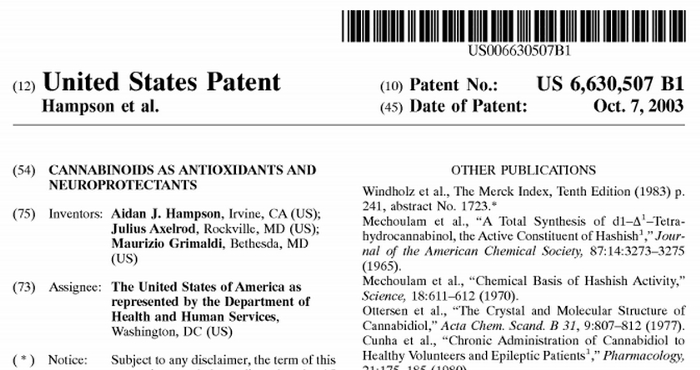 The patent gives the U.S. government exclusive rights in regards to the use of CBD and other cannabinoids for experimenting with different health conditions. In the patent, the inventors claim the non-psychoactive cannabinoids can help alleviate conditions caused by oxidative stress.

Cannabinoids have been found to have antioxidant properties, unrelated to NMDA receptor antagonism. This new found property makes cannabinoids useful in the treatment and prophylaxis of wide variety of oxidation associated conditions, such as age-related, inflammatory and other health concerns.

The fact that the U.S. government holds a patent on CBD contradicts the statements of the federal law, according to which, cannabis and its ingredients are void of medical value and involve high risk of abuse.

To cut the long story short, we have a patent that claims cannabis has many medical uses, but we also have the law which states quite the opposite and labels the plant and its derivatives as illegal. So yes, CBD may be legal in your state, but it remains banned on the federal level.

Does it mean the Government holds the patent for cannabis?

Not really. While you may think of the patent as a patent on cannabis itself, this would be inaccurate. The patent actually lists only the non-psychoactive cannabinoids (both natural and synthetic).

THC (tetrahydrocannabinol) is another of the cannabinoids that has been shown to be neuroprotective in cell cultures, but this protection was believed to be mediated by interaction at the cannabinoid receptor, and so would be accompanied by undesired psychotropic side effects.

Nonetheless, the patent covers only a narrow range of pplications of the non-intoxicating cannabinoids. I t alsounderlines that the production or use of marijuana and cannabinoids overall is out of this range.

Why does the U.S. government hold a patent on CBD?

The purpose of the patent is to “provide a new class of antioxidant drugs that have particular application as neuroprotectants.”

The inventors claim to have recognized “a previously unanticipated antioxidant property of cannabinoids in general”. Interestingly, the patent does not cover cannabinoids that interact with cannabinoid pathways (receptors) directly.

“This new found property makes cannabinoids useful in the treatment and prophylaxis of wide variety of oxidation associated problems. The cannabinoids are found to have particular application as neuroprotectants. For example, in limiting neurological damage following ischemic insults, such as stroke and trauma.

What’s the bottom line of the story?

The bottom line is that pharmaceutical companies can make drugs based on cannabidiol and cannabinoids. The government has no problem with that. However, the federal law makes it illegal to conduct research on cannabis on the federal level. In addition, it blocks federal banks from supporting cannabis businesses, and forbids making any open claims on CBD curing or healing people. Because hey, according to the Controlled Substances Act, cannabinoids have no medicinal value.

How can we change the tides?

Well, the one and only option is to reschedule cannabis or take it off the Controlled Substances Act. This, however, is a very complex process. It involves not only President, but also other governig bodies of the federal administration. The good news is that there are more and more in-depth studies supporting the health benefits of CBD. Let us hope that this will only be a matter of time.

So… Can I buy CBD legally in my state?

Now, we understand that you might have gotten confused about using CBD given what you have read so far. Currently, the federal administration seems not to interfere with the states’ laws and the CBD businesses there.

More importantly, President Trump has said recently that he’s working on the bill to keep the federal administration away from the states.  This would ensure that only the states’ authorities can resolve the issue of cannabis. If he keeps that promise, it’s going to be a great step forward.

Generaly speaking, yes, you can buy hemp CBD products legally in all 50 states. Hemp-derived CBD oils have less than 0.3% THC, which makes them non-psychoactive, or non-intoxicating to be more specific.

Here at CBD Sky, we source our CBD from certified, non-GMO hemp.  We also use the supercritical CO2 extraction process to ensure the maximum purity and potency of the final product. Want to try if CBD works for anxiety, chronic pain, inflammation, or skin conditions? Feel free to browse our assortment.

We always provide our customers with 3rd party lab tests. We value transparency and we whant them to know the whole cannabinoid and terpene profile. This includes the potency and potential contaminants. Thanks to this, our customers know what they’re buying before they even put their hands on the bottle.

Did you know that the U.S. Government holds a patent on CBD and other non-psychoactive cannabinoids?